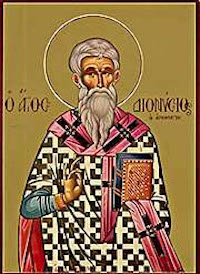 Knowing about the saints is an integral part of the Orthodox Christian Church and each of the saints has his or her own dedicated feast day. Those who are named after the saints will celebrate their name day on the saint’s feast day. In some parts of the world, the name day is more celebrated and honored than the individual’s birthday!

Saint Dionysius the Areopagite is one of the saints in the Orthodox Church that has his own feast day, which takes places on October 3rd. Here’s more information about this particular saint:

About Saint Dionysius the Areopagite

Under Paul’s guidance, he converted to Orthodox Christianity. After his conversion, Saint Paul made him a bishop. He was also married at the time when he was a member of the court and he had several children. He left his family after his conversion to enter into a monastery. He traveled to the Jerusalem and one of his books centered around his travels.

Saint Dionysius was martyred in the year 96 AD. After Saint Paul was martyred, Dionysius decided he wanted to go down that path, as well. He spent some time preaching in controversial areas. Eventually, he was captured and tortured.

Hymns of Saint Dionysius the Areopagite

Saint Dionysius the Areopagite’s feast day is on October 3rd of each year. Since he is also one of the Seventy, he is also celebrated on the feast day that has been set aside for them, which is January 4th of each year.  During his feast day, the following hymns are sung or chanted:

Having learned goodness and maintaining continence in all things,
you were arrayed with a good conscience as befits a priest.
From the chosen Vessel you drew ineffable mysteries;
you kept the faith, and finished a course equal to His.
Bishop martyr Dionysius, entreat Christ God that our souls may be saved.

As a disciple of the apostle caught up to the third heaven,
you spiritually entered the gate of heaven, Dionysius.
You were enriched with understanding of ineffable mysteries
and enlightened those who sat in the darkness of ignorance.
Therefore we cry to you: Rejoice, universal Father!

Saint Dionysius the Areopagite is one of the early saints of the Orthodox Christian Church and we celebrate his feast day pn October 3rd of each year. Check the Name Day page for more information about other Orthodox Christian name days.