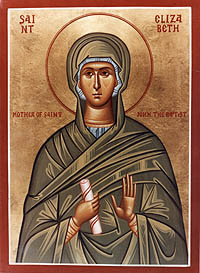 It is true that many of the early saints of the Greek Orthodox Church were men, but there were also plenty of female saints throughout the history of the church. When Orthodox Christian parents name their kids, they often prefer to name them after one of the saints. It is considered to be great honor to be named after them, and many celebrate their name days, which falls on the official feast day for the saint, instead of their own birthdays.

Elizabeth is one of those saints who is considered to be very important to the history of the church because she was the mother of the John the Baptist. Her feast day is on September 5th of each year and she is also remembered on June 24th along with her son. Here’s more information about Saint Elizabeth:

Saint Elizabeth, who is also referred to as the Righteous Elizabeth and mother of the Prophet John the Baptist, played an important role in the Bible. It is well established that Elizabeth belongs to the same line as Aaron, who was a well-known figure from the days of the Old Testament. She and Anna were sisters, and Anna was the mother of the Most Holy Theotokos and Jesus’s mother.

Elizabeth’s story was well covered in the New Testament in Luke 1:5-25. . It is written that she and her husband, Zachariah, were barren and that she suffered considerable shame because of this. They were both advancing in age, and it was thought that they missed their chance to have kids. However, God had another plan. According to the story:

“11 Then an angel of the Lord appeared to him, standing at the right side of the altar of incense. 12 When Zechariah saw him, he was startled and was gripped with fear.13 But the angel said to him: “Do not be afraid, Zechariah; your prayer has been heard. Your wife Elizabeth will bear you a son, and you are to call him John. 14 He will be a joy and delight to you, and many will rejoice because of his birth, 15 for he will be great in the sight of the Lord. He is never to take wine or other fermented drink, and he will be filled with the Holy Spirit even before he is born. 16 He will bring back many of the people of Israel to the Lord their God. 17 And he will go on before the Lord, in the spirit and power of Elijah, to turn the hearts of the parents to their children and the disobedient to the wisdom of the righteous—to make ready a people prepared for the Lord.”

Because he didn’t believe what the angel had to say at first, he was mute. Meanwhile, Elizabeth was instructed to name him John, even though no one in the family had that name. In other words, she had broken custom. She became pregnant with John five months after the angel appeared to Zachariah. Because she was the mother of John the Baptist, she holds a special place of honor in the Orthodox Church.

The memory of Your prophets Zachariah and Elizabeth
We celebrate today, O Lord.
By their prayers, we beseech You,
O Christ God, save our souls!

As the full moon brightly reflects the light of the sun,
You reflected the glory of the Messiah, the Light of wisdom!
With Zachariah you walked in all of the Lord¹s commandments, Elizabeth, beloved by God.
So as we bless you with fitting songs,
We praise the Lord, the bountiful Light, who enlightens all.

Saint Elizabeth’s name day is on September 5th of each year. Check the Name Day page for more information about other Orthodox Christian name days.