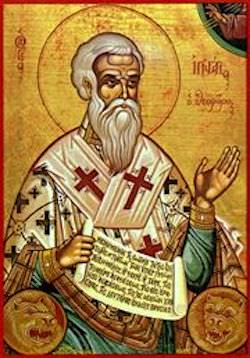 Learning about the lives of the saints is an important part of being an Orthodox Christian. They are not only looked at as great historical figures in the early life of the church, but they are also looked at as examples for Christians today. Some of these Christians are even named after them. Those who are celebrate their name day on the Saint’s feast day.

One of the things that Saint Ignatius is known for is that he was associated with Saint John the Theologian. He studied under Saint John and is therefore considered to be one of the successors to the Apostles. Not much is actually known about when h was born, however, his life as a Christian studying under Saint John has been well chronicled. We also know that he died sometime around AD 107. We do know that he became the third Bishop of Antioch in AD 68.

The martyrdom of Saint Ignatius is also well documented. He was arrested in Rome and sentenced to death in Rome’s big arena. Though we don’t quite know which “arena” the historical writings are directly referring to, it is likely that his martyrdom took place in the Coliseum.

Before he lost his life, he wrote a series of letters, many of which have survived today. These letters have been providing Christians with comfort and encouraging words ever since. He wrote letters to Christians in places such as Ephesus, Smyrna, and Rome. He also wrote to Saint Polycarp, the Bishop of Smyrna.

There are some hymns that can be found in the Orthodox Christian church service that celebrate Saint Ignatius. These hymns are typically sung during his feast day. Here are the words of these hymns translated from Greek into English:

As a sharer of the ways and a successor to the throne of the Apostles, O inspired of God, thou foundest discipline to be a means of ascent to divine vision. Wherefore, having rightly divided the word of truth, thou didst also contest for the Faith even unto blood, O Hieromartyr Ignatius. Intercede with Christ our God that our souls be saved.

The divine and brilliant day of thine illustrious contests doth proclaim to all mankind Him that was born of a Virgin; for it was for Him that thou didst thirst to delight in, and didst haste to be devoured by beasts in thy longing. Hence, O glorious Ignatius, the name God-bearer was rightly given to thee.