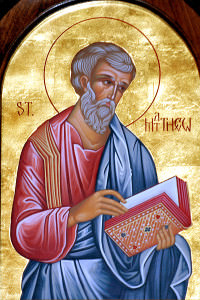 In the Orthodox Christian Church, people celebrate their name days with even more festivity than their own birthdays. It is a great honor to be named after one of the saints, and this occasion is celebrated yearly on the saint’s official name day. Saint Matthew is one of more common ones since he was one of the four apostles, who were the original people who spread the Gospel of Christ. His name day is on November 16th of each year. Here’s more information about him:

Not much is known of Saint Matthew’s early life, but we do know that he was born under the name of Levi. There is some debate as to exactly where he was born, but he is always identified as a Galilean and that he was born in Galilee, which was a part of Ancient Palestine. He is referred to as a “publican”, which is the name that was used in Ancient Greek and Ancient Roman times to describe the tax collectors. Given who the ruler was at the time, it is assumed that he collected taxes for Herod Antipas.

Given the relationship between the Jewish people and the Romans, men like Matthew (Levi, at the time) were despised by the Jews. However, there are accounts of Jesus dining with tax collectors and sinners, much to the chagrin of the religious Jews. In his own Gospel, Matthew himself talks of the day when he began following Christ. This story is told in Matthew 9:9-13 of the New Testament. This version was taken from the New International Version:

9 As Jesus went on from there, he saw a man named Matthew sitting at the tax collector’s booth. “Follow me,” he told him, and Matthew got up and followed him.

12 On hearing this, Jesus said, “It is not the healthy who need a doctor, but the sick. 13 But go and learn what this means: ‘I desire mercy, not sacrifice.’[a] For I have not come to call the righteous, but sinners.”

As one of the Apostles, Matthew devoted the rest of his life spreading the Gospel of Christ. There is some debate about exactly what he did after Jesus’s time on this earth came to an end. It is interesting to note that it is unknown if the author of the Gospel of Matthew was actually Matthew himself. Most church historians know that he spent some time preaching, and that he likely preached locally in Galilee before he traveled. There is some disagreement as to where he traveled after he left. It is largely accepted that he died as a martyr.

Greek Orthodox Christians recognize Matthew as one of their main saints, and many are named after him. Anyone named Matthew, Matt, Mathaios, Matthaios, Matthias is considered named after this Apostle. Traditions about how it is celebrated differs depending on the family, church, and where you live. Given his background, he is considered to be the Patron Saint of Tax Collectors.

Biography.com – Also Source for Image Above