Written by GreekBoston.com in Ancient Greek History, Greek Culture Comments Off on The Architectural Wonders of Ancient Athens 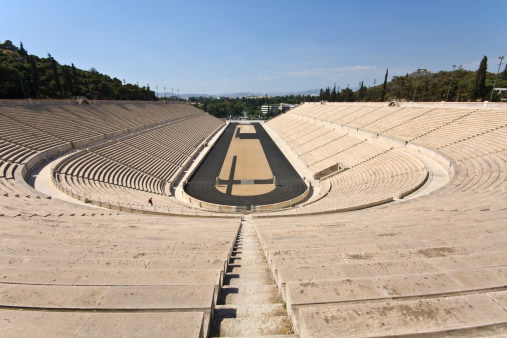 Ancient Greece, and in this case Ancient Athens, is said to have given the world many things, whether it’s theater, the Olympic Games, democracy or any of those ‘Cradle of Western Civilization-y’ type things we hear about in history class or from our grandparents. The great achievements of Ancient Greece are immortalized in the historical monuments and ruins that dot the capital of Modern Greece.

However many would be surprised to know that the Athens that gave the world so much managed to do so in only about 200 years. This period in Greek history is known as Classical Greece – or commonly the Golden Age of Athens. It starts with the beginning of Athenian Democracy around 500 BC and ends with the death of Alexander the Great in 323BC. We’ll take a tour of seven of the most popular landmarks from around Athens’ Golden Age. First off we’ll take a look at the Panathenaic Stadium, the Monument of Lysicrates and the Theater of Dionysus.

About the Panathenaic Stadium
The Panathenaic Stadium, also commonly known as Kallimarmaro [Grk: Καλλιμάρμαρο or “beautifully marbled”], is an ancient stadium originally built in 556 BC, but completely rebuilt in marble by the governor Lykourgos in the year 329. The stadium was used for the ancient Panathenaic Games held every 4 years in Athens in honor of the goddess Athena. In the following centuries, the stadium fell into ruin and was pillaged for its marble. It was again restored to its present form for the first modern Olympic Games held in the stadium in 1896.

The stadium has the distinction of being the largest stadium built entirely out of marble, which comes from the nearby Mount Panteli and was used for the Parthenon. The Panathenaic Stadium was also used in the 2004 Athens Olympic Games for archery and end to the marathon. In 1896 it had a seating capacity of 80,000 but today it can accommodate 45,000.

About the Monument of Lysicrates
The Choragic Monument of Lysicrates [Grk. Μνημείο του Λυσικράτη]was built by the choregos Lysicrates in the year 334 BC. Every year plays were presented at the nearby Theater of Dionysios and competed against one another. The choregos was a wealthy patron of the arts that’s paid for and oversaw the training of the chorus of the play. It was customary for the choregos of the winning play to receive a trophy, usually taking the form of a bronze tripod.

The monument stands over 30 feet high, with its round tholos [or circular building] resting on a raised square podium. It is covered with a marble roof and is capped with a capital of acanthus leaves where the bronze trophy once rested. Six ornate Corinthian columns support the roof and are joined together by the wall between them. Significantly it is the first monument to be built in the Corinthian order, hundreds of years before the Romans made it famous. This monument has proven to be so famous that several copies of it can be found all around the world.

Unfortunately the grand theater fell into the ruined state that is seen today. Although the Theater is not as impressive today as it was in its heyday, one can certainly marvel at the exact spot that Greek theater was born. The Theater of Dionysus is commonly confused with the Acropolis’ other theater: the extremely well restored Theater of Herod Atticus. 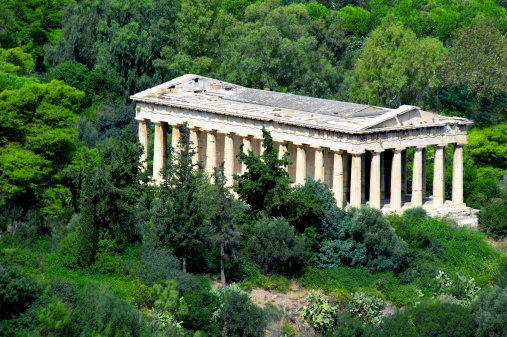 After taking a look at the Panathenaic Stadium in Pangrati, the Monument of Lysicrates in Plaka and the 4th Century Theater of Dionysus at the base of the Acropolis, four other major landmarks of Classical Athens remain. Remember Classical Athens or the time period of Athens’ Golden Age spans the 200 years between the start of Athenian democracy in 500BC and the death of Alexander the Great in 323 BC. Starting at the Acropolis—the crowning achievement of the city—we’ll travel down to the site of the Ancient Agora and end in the archaeological district of Kerameikos.

The Acropolis has come to be defined by the six monuments built on or around it. Surviving today are two theaters [the Theater of Dionysus and the Theater of Herod Atticus], The Erechtheion [the famous building with the Porch of the Maidens also referred to as the Caryatids], the monumental entrance way [The Propylaea], the smaller ornate Temple of Athena Nike, and last but not least the centerpiece monumental temple to the goddess Athena [The Parthenon]. It is the almost 2,500 year old Parthenon that has undoubtedly helped to give the Acropolis its reputation that has transcended countless centuries and civilizations.

About the Ancient Agora
The Ancient Agora of Athens [Grk: Αρχαία Αγορα] was the heart of Anceint Athens, the focus of political, social, commercial, judicial, cultural and even religious life of the Athenians. The area today is a large green area filled with ancient ruins from every era of the city. There are three significant buildings that remain standing in the Agora today.

The massive Stoa of Attalos was an ancient shopping center of sorts that was completely restored in the 1950’s and today is a museum that contains all of the objects found during the excavation of the Ancient Agora. The ornate 10th Century Byzantine Church of the Holy Apostles stands nearby the restored Stoa and provides a sharp contrast between the two periods of Athens’ history. And finally the Temple of Hephaestus, built soon after the Parthenon in the 440’s BC. The Temple is arguably the most well-preserved Greek temples in Greece today.

The Temple of Hephaestus – Ναός Ηφαίστου

About the Temple of Hephaestus
The Temple of Hephasestus [Grk: Ναός Ηφαίστου], also known as the Hephaisteion or the Thisseion [Grk: Θησείο], stands on the edge of the Ancient Agora of Athens. The Temple of Hephaestus is the best-preserved Ancient temple in Greece, with most of its original rough still standing. The temple was built around 440 BC, and was designed by the same architect that worked on the nearby Parthenon. The temple is built in the Doric order and has 6 columns on its eastern and western sides, and 13 on its northern and southern sides.

The temple was built out of the same Pantelic Marble as was used on the Parthenon, while its sculptures were carved from Parian marble from the island of Paros. From the 7th Century AD until 1833, the temple was used as a Greek Orthodox Church dedicated to Saint George Akamatus. The last liturgy took place in 1833 to mark King Otto’s arrival in Greece. King Otto later ordered the church’s conversion into a museum. It’s excellent state of preservation is thanks in large part to its time as a church as well as a museum.

The area of Kerameikos [Grk: Κεραπεικός] is an area of Athens that is the site of a great ancient cemetery located very close to the defensive walls of the city. The area of Athens was known in ancient times as the potter’s quarter of the city. The Greek word keramos [Grk: κεράμος] is appropriately where the English word Ceramic was derived. The Eridanos River flowed through Kerameikos, which provided the right type of clay needed to make pottery.

The two most important gates of Athens, the Dipylon and Sacred Gates stood in the area of Kerameikos. The ancient cemetery of Athens was situated just outside of the city walls, and excavations have uncovered countless artifacts including several burial stelae, which feature intricate relief sculptures. Several of the treasures uncovered here are on display in both the National Archaeological Museum across town, as well as the Kerameikos Museum.