Written by GreekBoston.com in Ancient Greek History Comments Off on About the Colossus of Rhodes 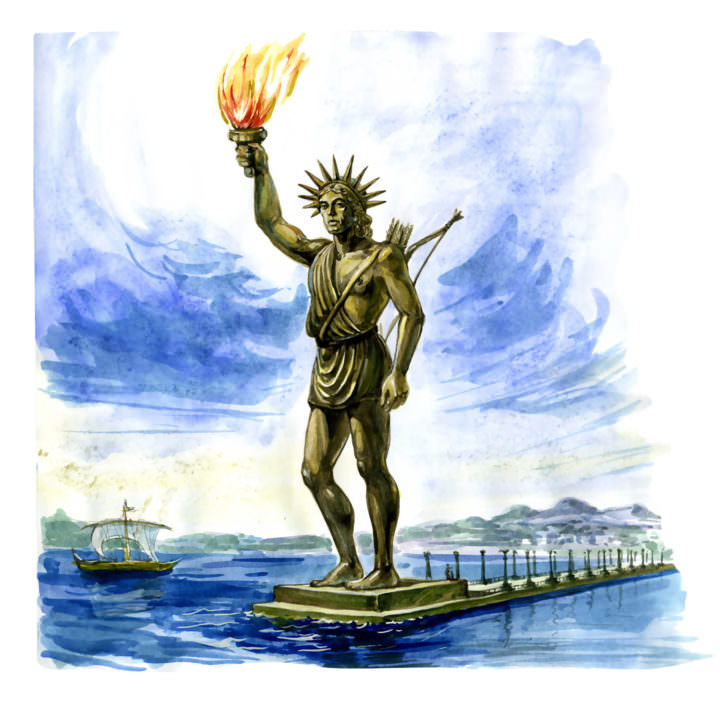 The Colossus of Rhodes was a large, impressive statue that overlooked the water on Rhodes island. Listed as one of the Seven Wonders of the Ancient World, the Colossus was truly an impressive statue. In Ancient Greece, statues such as these were often erected to honor past events or the gods, but only a select few had such an impressive size. Although there are statues that have similar dimensions around today, such as the Statue of Liberty, this was a lot more rare in Ancient Greece. It was unfortunately destroyed in an earthquake that struck the island in 226 B.C. Here’s more information about the statue:

Why the Colossus of Rhodes Was Built

Construction for the statue appears to have begun around 292 B.C. It was finished in 280 B.C. and was dedicated to Helios, the god of the sun in Greek mythology. It was initially built to celebrate the triumph of Rhodes defeating Antigonus I Monophthalmus, the kind of Cyprus. His son attacked Rhodes on 305 BC. According to the most contemporary records, the Colossus was about thirty-three meters or seventy cubits tall which is the estimated height of Statue of Liberty, making it the longest structure of the ancient times. There is some controversy as to whether it was made of iron or bronze.

The base of the statue was estimated to have a circumference of 8 meters and was a rounded or octagonal shape. The feet were cut in stone and secured with delicate bronze plates bolted together. The different parts of the statue were cast separately and were made up of a series of plates that were later assembled. Artists, archaeologists, and historians have since tried to fully recreate the look of the statue and there is some debate over certain details such as the shape of the base and exactly how the statue was positioned. The common theory is that it overlooked the entrance of the main harbor on Rhodes. Later on,

How the Statue Was Destroyed

As mentioned above, the statue was completely destroyed in an earthquake in 226 B.C but before that the people of Rhodes had over fifty hears to enjoy it. The earthquake also caused a significant harm to vast sections of the town, including the harbor and business structures. According to Strabo, the people left the broken pieces where they fell and even by glimpsing the broken shapes, people could still see how impressive the statue once was. According to the records of Theophanes the Confessor, in 653 AD, Arabian army under Muslim Caliph Muawiyah I captured Rhodes. He melted down the statue and sold it to a Jewish merchant from Edessa. The story states it took nine hundred camels to carry all the pieces.

In 2015 a team of European architects declared their plan to build a new Colossus which would cost around $283 million and will be one hundred and fifty meters tall. The statue would have facilities like a cultural room, a library, a hall for exhibition and a light house. Everything will be powered by solar energy.

All About Epic Poetry in Ancient Greece