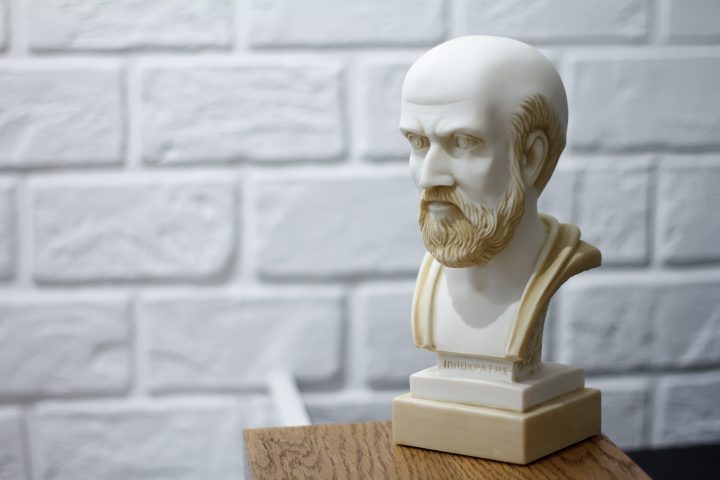 Hippocrates is one of the most recognizable names that has come out of Ancient Greece. Most of us know him as the Father of Medicine, and his influence is felt to this day. Physicians take what is known as the “Hippocratic Oath” as they enter into their practices. However, there was a lot more to his life than simply being an Ancient Greek physician. Here is a look at what you need to know about Hippocrates:

Hippocrates II, the Father of Medicine, was born about 460 B.C. in Kos, Greece. Aside from that, not much is known about his life. All of the information we have about him is from hundreds of years after his death, so the truth has been lost to time.

Most of the information we have about Hippocrates is from a biography written by Soranus of Ephesus, another Greek physician from the 2nd century. Soranus wrote that Hippocrates was the son of Heraclides and Praxitela. There were many physicians in Hippocrates’ family, including his grandfather and father, from whom he learned his art. This includes his two sons Thessalus and Draco, and his son-in-law Polybus.

Hippocrates spent much of his adult life traveling around Greece and southeastern Europe teaching medicine. It is unclear of when he died exactly, but people are in agreement that he lived into his old age. It is thought he was anywhere from 83 to 100 years old when he passed away in  Larissa, Greece.

All About Hippocratic Theory

A main tenet of Hippocratic Theory was the “crisis,” a watershed in the progression of an illness after which the patient would either begin to recover or the disease would prevail and result in death.

Hippocrates is the first person in history credited with the idea that illness was not caused by deities or bad luck, but arose naturally. Of course, Hippocrates was a long way off from germ theory and other ideas of modern medicine, but his theories were a major stepping stone for scientific thought.

Hippocratic works taught that physicians should always be professional, neat, and disciplined. They emphasized the importance of attention to detail and bedside manner. Hippocratic medicine was gentle and passive. Patients were treated with rest and cleanliness, focusing on allowing the body to heal itself rather than harsh, aggressive treatments. Hippocratic works taught that physicians should observe their patients thoroughly and take detailed case notes.

Hippocrates was the first to describe many heretofore unknown medical conditions, including many now named after him, like Hippocratic clubbing and Hippocratic facies.

Hippocrates made vast advances in the practice of medicine by dividing ailments into categories and integrating new terminology into his field. We have him to thank for useful distinctions like acute versus chronic and endemic versus epidemic. Hippocrates’ work in the field of chest surgery is still relevant to modern practitioners, he developed numerous treatments for ailments of the rectum and advised lifestyle changes to improve the condition of diabetic patients.

The Hippocratic Corpus, a collection of early medical documents from Alexandrian Greece has multiple authors, and it is unknown whether Hippocrates was in fact one of them. The Hippocratic Oath is taken from one of these documents and is still used today to set the high standard of behavior to which medical practitioners are held. Although medical advances stalled for centuries after his life, Hippocrates’ extensive influence on the field of medicine is undoubtable.