Written by GreekBoston.com in Modern Greek History Comments Off on Get to Know Ioannis Kapodistrias 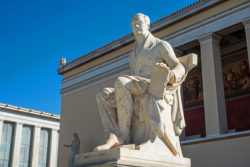 When Greece won their independence from the Ottoman Empire, the country was in turmoil. Although the Greeks were united in their goal to defeat the Turks and become independent once again, they began to show signs of being divided. The people knew they needed to form a system of government, but this proved a difficult task. During the process, Ioannis Kapodistrias became the governor of Greece. He was eventually assassinated, which led to the development of the Kingdom of Greece. Here’s more information about him:

Born the son of nobility on the island of Corfu on February 11, 1776, Ioannis Kapodistrias came from a long line of movers and shakers. His title of count dated back to Turkish sieges when he ancestors took up arms with the Venetians to stave them off.

Kapodistrias received his education at the University of Padua, where he studied law, medicine, and philosophy. After Russia and Turkey drove the French forces from the Ionian islands, Kapodistrias helped author the second constitution for the new state of the Septinsular Republic in 1802. He was appointed the secretary of state in the following year.

The French regained the Ionian islands in 1807. Kapodistrias joined Russian foreign service in 1809. His expertize on Baltic affairs landed him a position on the lower Danube River with the commanding officer of the Russian military forces.

Rise of a Politician

After Napoleon’s invasion of Russia began working as a diplomat. After the war, Kapodistrias attended the Congress of Vienna representing Russia. He also proved himself indispensable to Alexander I, and began co-directing the Ministry of Foreign Affairs at Alexander’s behest.

But Kapodístrias had misgivings about Alexander’s Holy Alliance with Austria and Prussia. This earned him the enmity of Austria’s chancellor Metternich, who used his growing influence on the emperor to undermine Kapodístrias.

Alexander’s refusal to assist the Greeks revolting against Turkey put Kapodístrias between a rock and a hard place. Kapodístrias supported Greek independence even if he refused to lead the revolutionaries. So he took a break from Russian service and moved to Geneva. While there, he provided both moral and material support to the Greek rebels. In 1827, he was elected Greece’s provisional president.

After Kapodístrias finally cut himself loose from Russian service, he traveled around Europe seeking financial and diplomatic aid for the War of Greek Independence. When he eventually landed in Greece for the first time in January 1828, he discovered a hodge-podge of warring Greek factions fighting each other as well as the Ottoman Empire.

As the first new governor of the new Greek state, he focused his formidable abilities on convincing France, Russia, and Great Britain to negotiate with him over the selection of a Greek monarch and the settlement of Greek territories. He became the head of a political party that was pro-Russia, which was another point that divided people.

Finally, Kapodistrias reached his end. On September 27, 1831, he was shot and stabbed by two men as he exited church. His younger brother replaced him as the Governor of Greece for a brief time, but the assassination received international attention and eventually led to France, England, and Russia to establish the Kingdom of Greece and appoint a new monarch, Otto from Bavaria.