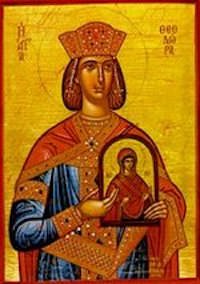 The lives of the saints are important to Orthodox Christians and are an integral part of the life of the people in the church. They learn about what their lives were like and in general, they serve as examples on how to live a devout, Christian life. Some people are even named after these saints and those who are celebrate their name day on the saint’s feast day.

Theodora is most well known for being the wife of Emperor Theophilus, but she also has an important part in church history on her own. She was alive in the 9th Century AD and she was most known for being an “iconodule”, which means that she supported the use of icons, or images, as part of the Orthodox Christian Church.

She initially came from a place called Paphlagonia, which was on the Black Sea in the region known as Anatolia, which is in modern-day Turkey. At the time, Paphlagonia was part of the Byzantine Empire. She was the daughter of a military commander named Marinus and she was raised as a Christian. She was part of the upper class (aristocracy) and is thought to be of Armenian descent. However, not much else is known about her early years and family background.

Euphrosyne, Theophilus’s stepmother, chose Theodora to be his wife. They had seven children together, five daughters and two sons. On the surface, Theodora looked like a dutiful wife. However, she did defy Theophilus on the matter of icons. He was an iconoclast and didn’t support the use of icons. She, however, did support them and she secretly worked to preserve them. When Theophilus died in 842 AD, Theodora became the sole Empress. She restored the use of icons in the church once she came back into power.

There are some hymns of Saint Theodora that are usually chanted on her feast day. Here are the words to the hymns, translated into English:

Apolytikion of Empress Theodora – Plagal of the First Tone

As a right worthy namesake of gifts bestowed of God, and a divinely-wrought image of holy wisdom and faith, thou didst make the Church to shine with godly piety; for thou didst demonstrate to all that the Saints in every age have shown honor to the icons, O Theodora, thou righteous and fair adornment of the Orthodox.

Kontakion of Empress Theodora – Plagal of the Fourth Tone

We sing thy praises as the gem and fairness of the Church, and as a diadem and pattern of all Christian queens, O all-lauded and divinely-crowned Theodora; for in bringing back the icons to their rightful place, thou didst cast usurping heresy out of the Church. Hence, we cry to thee: Rejoice, O Sovereign most venerable.