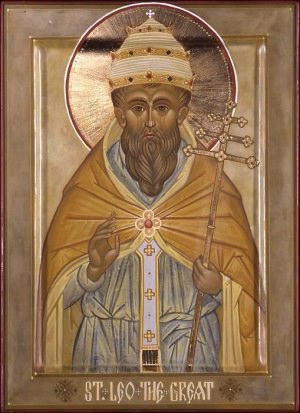 There are a lot of people who played important roles in the early days of the Orthodox Church. Those individuals who stand out as having the greatest impact are forever honored as saints. As a result of this, we celebrate the lives of these saints each calendar year because each has his or her own feast day. Those who are named after the saint will celebrate his or her name day on the saint’s feast day.

Saint Leo is one of these saints. His feast day takes place every year on February 18th. Here’s more information about the life of this saint:

There is some debate as to where Saint Leo, also referred to as Saint Leo the Great, was originally born. Some historical sources say that he was born in Rome, others that he was born in Tuscany, which at the time was known as Tyrrenia. There is also no real record of his birth. However, we do know that he was consecrated to the archiepiscopal throne in 440 AD. First, he became a deacon and then he was eventually consecrated as a bishop.

It is important to understand that during the time that Leo was alive, the Orthodox Church was in a very turbulent state. There were a lot of heretics (false teachers) during this time and Leo did a lot to defend the Orthodox Christian faith. The particular heresies that he was watchful of originated with Eutyches and Dioscorus of Alexandria.

Saint Leo was highly prolific and in addition to defending the faith, he also was a prolific writer. He wrote over 90 sermons and 140 letters. He passed away in 461 A.D.

There are some hymns that can be found in the Orthodox Christian church service that celebrate Saint Leo. This music is usually chanted on his feast day, which takes place each year on February 18th. Here’s more information about the hymns:

A model of faith and the image of gentleness, the example of your life has shown you forth to your sheep-fold to be a master of temperance. You obtained thus through being lowly, gifts from on high, and riches through poverty. Leo, our father and priest of priests, intercede with Christ our God that He may save our souls.

Seated on the priestly throne, O great and glorious Leo, with the Holy Trinity’s inspired and God-given doctrines thou didst stop the gaping mouths of spiritual lions and didst shine upon thy flock the light of God-knowledge, and art glorified now as a divine initiate of the sublime grace of God.