What The Gospels Mean to Greek Orthodox

The first books we find in the New Testament are the four Gospels, the books of Matthew, Mark, Luke and John. Gospels mean good news, as the Greek is ευαγγελιον, which literally means “good message.” These are the stories and teachings that we have of Jesus Christ’s life and ministry. Though it is highly contested when these books were written, they are said to have been written between 50AD and 110AD, still giving them much separation from the actual events. Most people don’t realize this, but St. Paul’s epistles are actually the earliest Christian writings that we have, coming sooner than Mark’s gospel.

We read selections of the Gospels throughout the year. There is a Gospel reading for every day that a Divine Liturgy could be served (which is most days of the year besides the weekdays in Great Lent minus feast days that fall during Lent, like the Annunciation). The Lectionary is a list that tells us what selections are supposed to be read on which days. Every year we have the same readings, starting the cycle on Pascha (and since Pascha moves every year, the dates of the Gospels shift every year too). Sunday Gospels work on their own regiments within these cycles, as Sundays are given a special preeminence, due to it being the Lord’s Day. The Gospels follow a pretty solid pattern. From Pascha to Pentecost we hear mostly from the Gospel of John, from Pentecost to the Exaltation of the Cross we hear mostly from the Gospel of Matthew (especially on Sundays), from the Cross until Lent we hear mostly from Gospel of Luke and lastly on the weekends of Lent we hear the Gospel of Mark (and it is the shortest, so it fits well). Though we don’t read the extents of all the books, the people who gave us the lectionary have given us off the pieces for us to chew and discuss and learn from.

You may have seen images of angels with the faces of a human, lion, ox and eagle in the Church or iconography somewhere. This comes from the book of Ezekiel, from the Old Testament, chapter 1; we read about four “living creatures” that carry the throne of God. These living creatures had wings and the faces of a human, lion, ox and eagle. These four animals have been given to represent the four different gospels. The Human is Matthew, which starts with the genealogy from Abraham to Jesus, showing his humanity. The Lion is Mark, because in the beginning of the Gospel he has St. John the Baptist, roaring like a lion in the wilderness. The Ox is Luke, because the ox was a sacrificial animal and Luke not only starts with the priestly duties of Zacharias, but also focuses on the priestly and sacrificial natures of Christ. Lastly, the Eagle is John, because his gospel is much “higher” than the rest, even just considering the introduction, focusing on Christ being God the Word (Logos). The eagle is also known for being able to look right into the sun, which also compares to John because he is able to look directly at Jesus and describe Him in the appropriate and Godly manner that He should be. 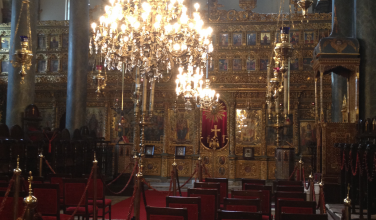